Leicester City and Donald Trump: a new era for the Premier League?

From a statistical perspective, the Leicester City story is a bit like the Donald Trump story. In both cases an outsider has risen unexpectedly to being on the verge of winning a competition while pundits have consistently written off their chances. Both threaten to disrupt the established order, and both should cause us to wonder if there has been some fundamental shift in the landscape that has facilitated their unexpected rise.1

Sticking to football, I could imagine that Leicester is a one-off. Some people have described them as a Black Swan, and they are certainly an extreme event. According to transfermarkt they have the 12th most valuable squad in the EPL. Transfermarkt values are highly correlated with wages (in any season the correlation is over +0.95) and as I pointed out in Money and Football, most clubs that win the EPL League pay either the highest or second highest wages.

In the history of the EPL no club has won it with anything lower that the fourth largest wage bill (Blackburn 1994/95). Indeed, probably the only cases that come close are the teams of Brian Clough in the 1970s (Derby and Nottingham Forest), and before that Ipswich Town in 1962. In the past I have written at length about the genius of Brian Clough who transformed every team he managed (apart from Leeds United during the infamous 44 days), but with all due respect to Claudio Ranieri, who has had a long career at the highest level and is on the verge of an extraordinary achievement, his record is more modest.

In any case, the Black Swan comparison is not quite right here, As Nicholas Taleb made clear in his great book, black swans are to be found in statistical processes that do not conform to a normal distribution and where extremes are possible. Stock prices can rise and fall without limit, but while you can be very tall or very short, no mature human has ever been one inch tall or 50 feet tall. Individual height tends to conform to a normal distribution, stock prices don’t. Football league tables with their limited number of games and points tend to conform to a normal also- they’re not black swan country.

It is possible, in theory, that Leicester have been extraordinary lucky. At the start of the season many people expected them to finish mid-table. A typical mid-table team scores about 50 goals in a season and concedes a similar number. In 31 games Leicester have already scored 54 and conceded only 31- if they continue at this rate they will end up scoring 66 and letting in 38 for a goal difference of +28. For comparison, on average over the last ten seasons the champions scored 84, conceded 31 – goal difference +53. You have to go back to Liverpool in 1977 for a championship team scoring fewer goals and Derby in 1975 for a lower goal difference.

At the same time, the standard deviation of goals scored by a mid-table team is about 9 goals, and conceded is about 8. In other words, Leicester could win the Championship with goals scored and goals conceded not quite two standard deviations away from a typical mid-table team, something one might argue could happen by chance. So there is a case for saying this is an unusual season and that Leicester have been, at least in a statistical sense, lucky (while adding all the usual caveats- the best teams are the ones that ride their luck, the skill lies in exploiting one’s good fortune, etc).

I’m more interested in arguing the case for an unusual season. There have certainly been other unusual elements – the struggles of Chelsea for example.

So far, there have been significantly fewer home wins (39.6%) than an average EPL season (46.3%). The difference between the percentage of home wins and away wins has narrowed dramatically- the difference is only 6% this season, compared to an average of 19% over the history of the EPL.

There’s also evidence that the teams with greater financial resources are not as dominant. I prefer wages as a measure of resources, but we won’t see the audited accounts of all the clubs for more than a year from now. Given the high correlation with the transfermarkt values, it’s probably safe to say that a club has a higher transfermarkt value than its opponent will also be revealed to have a higher wage bill.

Over the history of the premier league the team with the higher wages has won 48% of games- this season the figure is lower, but not by much (45%), and the difference is not statistically significant. However, teams with greater financial resources are winning less often at home (24.4% this season compared to 29.4% historically) and away teams with smaller financial resources are winning more often) 12.5% compared to 8.6%. Both of these differences are statistically significant.

At the same time as dominant teams not being so dominant, there’s also evidence the distribution of resources is becoming more equal. For this I need to rely on the skewness of wages/player values. Historically a small number of clubs have had much more cash to spend than most clubs, skewing the distribution to the right. A fall in skewness therefore implies a trend toward equality. The chart shows the EPL data for the last 20 years- there was a significant jump in the early 2000s, but we seem to be returning to the position of the late 1990s. 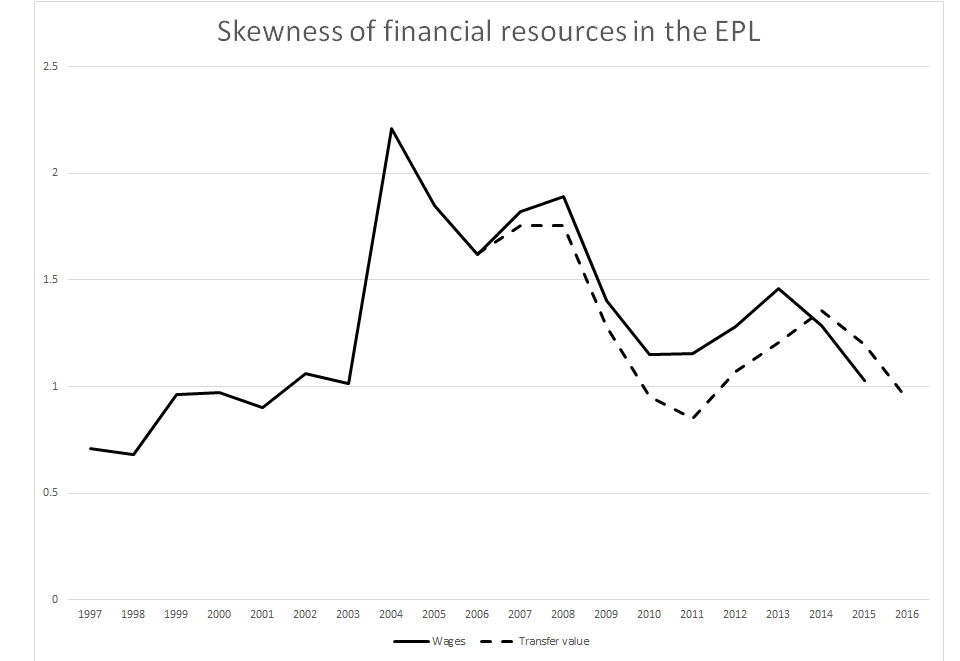 Another indicator that equality may be increasing is the ratio of the highest to the lowest wage in the EPL. In the first season of the EPL the ratio was 3X. This rose to around 4X in the 1990s, jumped up to 7X in 1998, and peaked at almost 8X in 2007. Since 2011 it has been falling and in 2014 (the last year for which we have complete wage data) it had fallen to 5X. This trend also appears in the transfermarkt data which goes up to 2016.

I think there are some obvious explanations for the changing pattern of inequality:

The combination of these trends explain why financial inequality grew in the 2000s and has been declining in recent years (of course, current discussions about a Superleague or revamped Champions League may yet change all that).

As a final point, it is worth remembering that while the 2000s were a period of unprecedented dominance (the big four of the time- Manchester United, Arsenal, Chelsea and Liverpool – took the top four slots in most seasons), the 1990s were hardly an era of egalitarianism – the league was dominated by Manchester United and Arsenal.

But there is reason to think that things will be different this time. Back in the 1990s most players in the EPL still came from the UK (the old Rothmans Football Yearbook still listed the “foreign legion” because their numbers were small enough to make them seem exotic). This meant trawling in a smaller pool, and so less wealthy teams had limited choices. Now that the EPL draws from a global pool (and few other leagues have comparable buying power), the smaller clubs have better choices, and that should make them more competitive.

1 To be clear, I see no other link between Donald Trump, who is a serial liar, rampant xenophobe, racist and misogynist and Leicester City, which is a fine, upstanding football club.