How MLS is becoming more like the Premier League

The MLS Players’ Association released its annual salary guide a few days ago and so it is interesting to review this in the light of the trends in attendance and TV viewership that I posted in the last few days.

The main headline is that aggregate salaries have risen to $250 million, with an average per team just shy of $11 million per team. Still a long way behind the $150 million per team for the Premier League two seasons ago, but getting closer to Belgium, where the figure was $14 million per team and more or less in line with Ukraine.

Of course, catching up with Belgium doesn’t sound so great, but this year’s figure does represent a $50 million increase in total salaries paid (25%) and a 19% increase in salaries per team. Given that Forbes estimated that MLS made an aggregate operating loss of $20 million, last year while attendance is largely flat and there is no new broadcast income, it’s fair to ask where the money is coming from. There are some new sources of income, such as new sponsorship deals and the ever-mysterious SUM, but the most likely candidate must be the expansion fees paid by the teams entering the league. In addition LAFC, the expansion team, spent $11 million on salaries.

It is interesting to look at the distribution. As can be seen from the Table below, the ratio from top to bottom is 5:1 – much more unequal than a league such as the NFL which promotes itself on competitive balance but much less unequal than the promotion and relegation leagues of Europe where the ratio is 10:1 or higher. 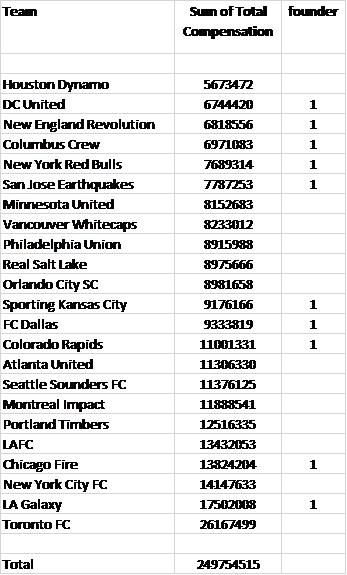 A useful measure of dispersion in this case is the “coefficient of variation” (CV) – which is the standard deviation divided by the mean. For the NFL the CV is 0.11, for the EPL it is 0.71 – more than six times greater. For the current year the CV for MLS is 0.41 – somewhere in the middle. That said, there is a clear trend. In 2006 MLS total payroll was a mere $27 million and the average for the 12 team league was $2.3 million. That amounts annual compound growth of almost 20% in total payroll.

A large part of this can be attributed to expansion but salaries have been growing at a rate of 10% per year or more at the founder franchises. This of course sounds quite rapid but it is worth remembering that wage growth in soccer is generally quite rapid – in Europe UEFA estimates the annual increase was about 6% between 2010 and 2016, and since MLS is still far behind the European big leagues, it is catching only slowly.

Another feature of the data is that CV for MLS is also growing- wages are becoming more dispersed. Back in 2006 the CV was only 0.23 – about half of what it is today. And the table indicates where this growing inequality is coming from: seven of the top ten spenders are expansion franchises and five of the bottom six spenders are founder members. This stacks up nicely with my last post which showed that attendance growth is much faster at the expansion franchises. These franchises are booming – they are keen to spend more money on players and this is bringing in larger audiences.

Now, I have for many years presented data, mainly from England, to show that in leagues with wide salary dispersion money tends to buy success. Other researchers have found the same thing, often using evidence from other leagues, and this point is no longer disputed as far as I know. So the implication of what is happening in MLS should be that money is playing a bigger role in determining the outcome of the season. Is this true? Well, if you look at the correlation coefficient between salaries and regular season win percentage in 2006 it was essentially zero (in fact, it is -.01). In 2017 the correlation coefficient was +0.54. For comparison, the correlation coefficient between regular season win percentage and salaries in the NFL in 2017 was +0.20, while for the Premier League it was around +0.8. In that sense at least, MLS is becoming more like the Premier League.

The interesting feature of this to me is that MLS always proclaims the virtue of competitive balance and says this justifies restrictive measures such as salary caps and drafts, but in reality the league seems covertly to be in the process of abandoning competitive balance as an objective. Moreover, the inequality that is emerging is largely between the founders with smaller gates and lower spending, and the expansion teams with larger gates and bigger spending. Maybe MLS is listening to me – I’ve said for years that competitive balance is largely irrelevant to the success of a league. More likely there’s an internal struggle going on among the owners about the future of the league. Expansion fees may tide over the league for a few years, but by the end of the decade I think the owners will have to spend more of their own money to keep the momentum going.